The GMC Syclone 6310 is not technically built by GM but who cares when can get a good performing compressor that’s also incredibly quiet. In fact, it may actually be the quietest air compressor for home use that’s currently available. It has a few minor shortcomings which would generally not be considered deal-breakers. 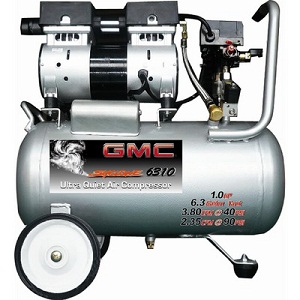 The 6.3 gallon tank size of the Syclone 6310 means the motor won’t be constantly cycling on and off like some of the other smaller compressors. At 46 pounds, it’s about average weight when it comes portable air compressors. It has a traditional horizontal tank design, and wheels that make it fairly easy to move around. (TIP: Add a couple washers before installing the wheels so they do not rub against the axle) The silver paint is not the most attractive but it would be silly to judge compressors by how appealing they look.

The 6310 is a twin-cylinder compressor so the air tank gets filled up pretty quickly. With 2.4 CFM at 90 PSI, it’s enough for most light to medium duty projects around the house. Most homeowners will not need a more powerful (and much LOUDER) compressor for more common tasks such as using a brad nailer, inflating tires, or blowing off dust/dirt. Maximum PSI is rated at 120.

While arguments can be made for both an oil-free and oil-lubricated pump, most homeowners will prefer the oil-less variety that the GMC Syclone 6310 has simply because it’s one less thing to maintain and you do not have to worry about always having in on level ground. Many oil-free pumps in this compressor’s price range are rated at only 500 hours. The motor and pump of the Syclone was designed to last 3,000+ hours!

What’s to say about the compressor’s noise level other than it could possibly be the most quiet compressor you can buy. Rated at only 60 decibels, it’s one of only a handful of compressors that allow you to hold a normal conversation while it’s running. The Rolair JC10 is the only other compressor that rates as quiet. For normal home use, the noise level of a compressor is one of the most important factors, just ask your spouse. Someone who does airbrush work could very well use the GMC Syclone 6310 in an apartment without driving their neighbors crazy.

The GMC Syclone 6310 is most suitable for the garage or small projects around the house. Contractors and mechanics may want to look elsewhere at more powerful compressors since having a quiet compressor is not so important. This compressor is great for the first time user and even if you’ll only be inflating tires, it’s a good option due to its large tank. Many of the smaller compressors simply don’t have a large enough tank to completely fill a tire. While the photos may seem like this is a full size compressor, it’s actually quite compact and easy to move from room to room.

The GMC Syclone 6310 is not one of the bigger names when it comes to air compressors but if you’re looking for a quiet air compressor to use around the house and garage, you’ll be hard pressed to find one quieter. As mentioned before, the Rolair JC10 is also extremely quiet. While the Rolair has a better reputation for build quality, it only has a 2.5 gallon tank. You will have to decide which characteristic is more important to you but both options are good ones.