You want high performance in a portable air compressor? The Makita MAC5200 is another model in the company’s “big bore” lineup and is considered by many the big-brother of the popular selling MAC2400. Like most other Makita products, this compressor is extremely well built. It’s obvious engineers spent their time designing this one as the numerous nifty features show. In this review, we show you what’s important. 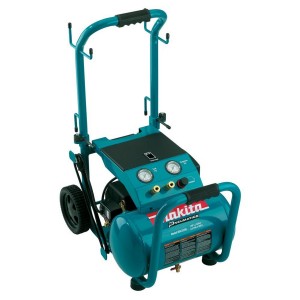 Weighing in at about 100 pounds (it’s heavier than it looks) incorporating a 5.2 gallon air tank, the MAC5200 wants you to know it’s heavy duty and ready for work. With its large 8″ pneumatic wheels, moving it through the the roughest of job site terrains is not an issue. This Makita is one of the few that have an industrial size air filter for better performance and easier maintenance. The folding handle allows for easy storage and its low profile lets you actually transport it in the trunk  of a car. How many contractor air compressors can say that? Two other handy features are the built-in storage compartment and hose wrap (for up to 50 ft. of hose).

The MAC5200 was built with performance in mind as the cast iron cylinder has greater bore and stroke for more power. With its 6.5 CFM at 90 PSI, you can easily run two framing nailers simutaneously, a plasma cutter, impact wrench, or pretty much any other air tool you throw at it. Die grinders may be the exception as they require a crazy amount of airflow to keep up. 0 to 140 PSI comes in a relatively quick two minutes and the well sealed tank is able to hold that pressure overnight if you choose to do so. The recovery time is also very fast but having a 50% duty cycle means you should look elsewhere if you need a compressor that will run nonstop.

Measuring at a little under 90 decibels, the Makita MAC5200 is about 10 decibels louder than the MAC2400. While about average for this size of compressor, it runs at 3420 RPM which is twice as fast as its younger brother. While this helps with performance, it does make it louder. Still, this tool is quieter than some of the small pancake type compressors available.

This compressor is well-suited for the outdoor job site or inside a garage. With its large wheels, it can go on terrain that other compressors can’t roll on. Most DIYers may not need as much airflow as this model right now but it’s good to know it will be there in the future. Nothing is worse than buying a 2.5 CFM air compressor and then realizing your brand new impact wrench will not work with it. A few people have reported that the MAC5200 works great for blowing out a sprinkler system to winterize it. Very few compressors can claim that.

This air compressor is considered by many to be the best in its class. A powerful, well-designed, and solidly built air compressor such as this one makes it an excellent buy. Those concerned about its weight or noise level and don’t mind having slightly less airflow, the smaller MAC2400 may be a better choice for you. Otherwise, the Makita MAC5200 can be had for about $50 more; well worth the slightly higher price. As with all Makita air comrpessors, check current pricing as pricing can vary daily.